The last rant (It’s Basic Cause and Effect) had too much math, soooo…

There was an old belief that a person’s technical knowledge and intellectual capabilities were enough to make them successful. But a third variable is now in the equation (oops, starting to do that math thing again). The third leg of the Success Stool (If I can’t do an equation, then I’m going with the three-legged stool) is Emotional Intelligence.

Have some spare time? From your smart phone, tablet, or computer you can take this self-assessment test on Psychology Today.

It is generally considered that a person’s IQ will change little after adolescence. Once you rise to a certain level within an organization, you are probably dealing with people who are at the top 10 percent or so of intelligence. Therefore, IQ offers relatively little competitive advantage. 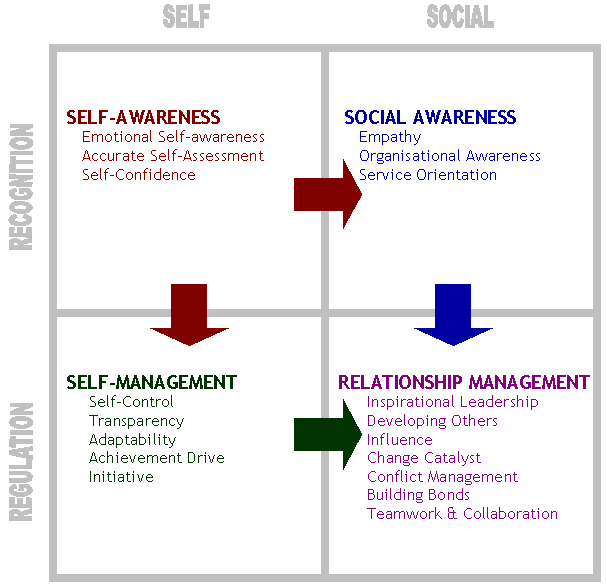 EI, on the other hand, can be learned at any age. It takes perseverance in the process of critical self-evaluation, commitment to improvement, and, of course, behavioral practice. EI does not necessarily increase with age, as you might expect. Some people may learn from life’s experiences, but many do not.

Emotional intelligence (EI) is the ability to identify, comprehend, and manage your own emotions as well as the emotions of others. EI is typically divided into four areas:

Daniel Goleman, who is a leader in the EI field, has determined that successful people possess a high level of emotional intelligence. As a result, they achieve higher financial goals, develop more effective and efficient organizational environments, and achieve higher productivity gains with their workforce. Mr. Goleman states that EI contributes 80 to 90 percent of the competencies that distinguish outstanding leaders from average leaders.

The behaviors identified include:

So, bottom line, if you want to advance your position in life, your IQ is set (blame your parents) and you can’t just focus on technical training (obviously it is good to have more and better technical knowledge than the next person). But don’t forget to focus on your EI. It can be learned at any age. (There goes my excuse).

© by Integrated Process Developers, Inc., all rights reserved.  Please contact us for permission before reprinting in whole or in part.

FacebookTwitterRedditLinkedInWhatsAppEmail
Page load link
This website uses cookies and third party services to offer you the best experience. Use of the site indicates you are okay with this. Check out our privacy policy for details. Continue
Go to Top